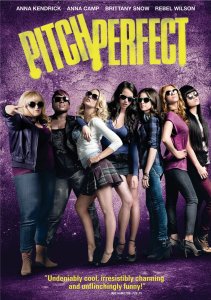 I saw Pitch Perfect in theaters when it came out, much like I just saw the sequel in theaters, the difference of course was that I didn’t really know what the hell Pitch Perfect was going to be about so the projectile vomit in the first few minutes was a strange choice on the movie’s part. Elizabeth Banks produced and stared in this movie and she, alongside John Michael Higgins play Gail and John, two commentators who bring you to the brink of laughing in tears every time they’re on screen. But neither of them are our main character, that honor belongs to Anna Kendrick’s Beca. Considering Twilight is a billion dollar industry in and of itself I can only presume a vast majority of you know her from there but others may know her from Scott Pilgrim vs. the World. Wherever you know her from, Pitch Perfect is where Anna Kendrick truly proved herself ready for the big leagues (And I’m so damn happy I followed her career!!).

Our other leading Bella’s are Anna Camp’s Aubrey Posen (True Blood’s Sarah Newlin), Brittany Snow’s Chloe (John Tucker Must Die’s Kate), Rebel Wilson’s Fat Amy (up and comer!), and a few other one-note characters there to fill out the ranks, like Ester Dean, Alexis Knapp, Hana Mae Lee, Kelly Jakle, Shelly Regner, and Wanetah Walmsley. Other cast members include our resident love interest Jesse Swanson played by Skler Astin, his roommate Benji Applebaum playd by Ben Platt, Bumper the leader of the Treblemakers who is played by Adam DeVine, and the hot guy played by Freddie Stroma who is literally only here to be hot!

This movie, seemingly filled with caricatures of people (the one note characters) actually spends a bit of time giving them a few traits that make them memorable, funny, and lovable which is why they stand out despite clearly being one-dimensional characters. It takes a great actor to make a one-dimensional character stand out from the cardboard cutouts we call extras. One thing I believe that helped this happen, though, was the fact that this is a musical and because it is almost impossible for a voice to be a carbon copy of another voice, it adds an extra level of individuality to the characters.

This film is a musical at its core, but unlike most musicals based on plays, this one is an original film (granted it’s based on a book but how many of you actually knew that?) and only features a few original songs with the remainder being covers and mashups of music. Because music is the draw of a musical, we tend to overlook the other aspects of a musical; the characters, plot, relationships, and conflict unless it directly relates to music (I’m looking at Swan Song from Glee!). They decided against that for this film, though. While music is still the draw, and likely pulled you in faster than Channing Tatum’s abs in Magic… Okay maybe not as fast as that, but still we came for the music. Who knew we would stay for the relationships that these young women build over the course of the movie in their attempt to prove themselves capable?

You’ve probably seen it, but that doesn’t mean you shouldn’t see it again!