My family and I have a penchant for loving disaster films. Death and destruction cast out at a startlingly fast rate are an intense draw for us, probably more than it should be. The disaster movie has been around for a long time and in recent decades CGI has given way to even better looking movies. One of the most interesting disaster movies I’ve ever seen, and I’ve seen it a lot, is Armageddon with Bruce Willis, Ben Affleck, and Liv Tyler.

Armageddon is about an asteroid “the size of Texas” that is heading towards Earth and it is up to us to save the planet (after several cities have been struck by fragments of course… well someone has to die or it isn’t our problem…). The movie decides to cast logic aside, and if you listen to the BTS commentary you’ll hear some people wondering why they were ignored on certain aspects of the film. One glaring issue I had was when Bruce Willis’ character made it abundantly clear that the well trained astronauts would have a harder time learning to manipulate a large drill than the oil drillers would have in learning to operate… a SPACE CRAFT!

That doesn’t make any sense, and when the director was called out on it, he ignored reason and went along with it. Granted we do love our everyday Joes’ being able to save our planet but… them… I don’t even know anymore.

Of course this is a film, so we can’t go very far without a little romance thrown into the mix. Liv Tyler plays Willis’ character’s daughter (respectively their characters are Grace and Harry Stamper and their relationship is awkward at best). Harry, as a father of course, is overly protective of his twenty-plus year old daughter’s sexuality and as such absolutely hates A.J. Frost (played by Affleck). But you know those daughters, always dating what daddies hate because he isn’t paying enough, if any, attention to you.

This particular love story presents us with one of the most interesting things in the film. Liv Tyler and Ben Affleck’s character are sharing an intimate moment together at one point and in the background is a song playing… a song being performed by Liv Tyler’s father Steven Tyler of Aerosmith. Just let all of that sink in when you re-watch the film.

Because this is an ensemble film about saving the world, we are treated to a collection of quirky supporting characters. They are brought together by NASA guy Dan Truman who is played by Billy Bob Thorton and their team consists of several interesting characters. Will Patton is Charles “Chick” Chapple, Steve Buscemi is the crazy Rockhound, Michael Clarke Duncan is Bear, Ken Campbell is Max Lennert, Owen Wilson (yup that guy, in a bit role of course) is Oscar Choi, and the minor character of Fred Noonan played by Clark Brolly. Partway into the film they are joined by Peter Stormare’s Lev Andropov. They each have some sort of significance, unless they die before doing anything of note and a couple of them actually do. But this is a disaster film, who the hell expects the main characters to make it out of one of these films? Yes, sometimes a few members of the cast make it out alive before the credits roll, but you’ll be hard pressed to find one that features the same characters from beginning to end without dying. 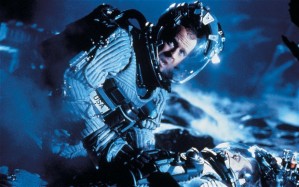 Armageddon is a good, old fashioned, fun disaster flick and I think it’s time to dust it off and slip it back in.