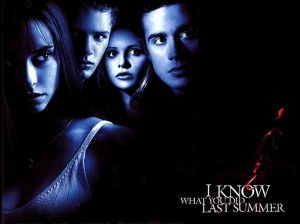 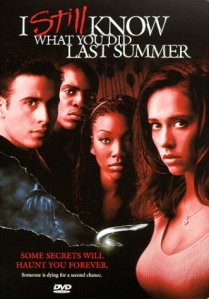 In the quiet seaside town, Julie and her boyfriend Ray Bronson (Freddie Prinze, Jr.) and their best friend Barry Cox (Ryan Phillippe) are supporting their best friend Helen Shivers (Sarah Michelle Gellar) as she wins a local beauty pageant. Partying together late that night they, drunkenly, drive along the coast towards a more private beach party and continue drinking as they enjoy a few of their last days together before college separates them forever. Unfortunately on the way home that night they manage to hit someone and, rather than do the intelligent thing as Julie suggests and call the police, they’re bullied by Barry into thinking of their futures and dumping the body in the lake. Of course a friend-non-friend named Max (Johnny Galecki) almost catches them but for the most part the disposal of the body goes off without a hitch… aside from the fact that the guy is still alive. 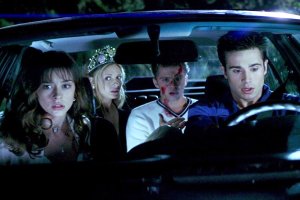 A year goes by and as Independence Day rolls around once more, Julie is convinced to go back home and she finds that some things have changed since their secret hit and run. Thus starts one of the most frightening killers that I believe has ever graced the silver screen. Rather than outright kill any of the four teens, the killer stalks them over the course of the weekend, letting them know that he can get to them at any time he pleases. This is an enhanced version of Scream, itself proving that there is no place that you are safe whether it be your own home, a police station, or a party surrounded by your friends. The killer in this film, in the course of a few days, manages to break into Helen’s home and eviscerate her hair while her entire family is there, run Barry over with a car outside of his gym, and throw a dead body into the trunk of Julie’s car and have it gone by the time she and her friends return (this last one is a little more ludicrous than the other two but it’s still fairly impressive). 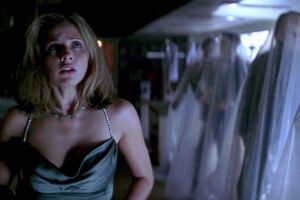 By the time he actually gets around to killing people, the man with the hook is brutally efficient with his weapon of choice, managing to dispatch Barry, a trained police officer, Helen’s older sister Elsa (Bridgette Wilson), and Helen herself in the course of an hour at the most. By the time Julie and Ray figure out anything is wrong, suspicions are running high and Julie believes Ray to be the killer, landing her in hot water when the person she trusts is the actual killer. 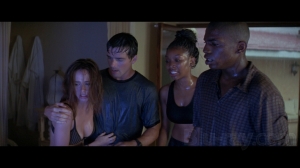 I Still Know What You Did Last Summer does what other horror films (bar Scream) fail to do as most of them never bring back the same cast twice. It shows the damage that can be done to someone who has suffered the brutal loss of their friends, subsequently stumbling onto their corpses, and being forced to kill the man attacking you in self-defense. It picks up around one year later and follows Julie as she tries to pick up the pieces of her life. Her friend and roommate Karla Wilson (Brandy Norwood) is doing everything in her power to keep Julie from crumbling and, upon winning a trip to Jamaica, decides that the two of them, Karla’s boyfriend Tyrell Martin (Mekhi Phifer), and another new friend Will Benson (Matthew Settle) should take the trip and enjoy a few days away from life.

Of course things go wrong, what with the first clue and all being that the answer given to win the trips was glaringly wrong and the second being the fact that they’re trip falls around the time that the island is plagued with horrific weather, but sometimes you just need to believe in the good of the world. Needless to say, things go rather poorly for them. 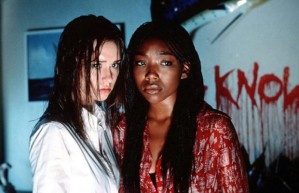 I Still Know What You Did Last Summer understood what a sequel was supposed to be. Enhance the good, eliminate the bad, and try and keep things new and original but also tying back to the mythos established. The killer is no less effective in this film, with a larger body count to boot, and his methods of terrorizing Julie seem designed to convince those around her that she’s just not quite sane and are so believable that, if this weren’t a movie, you might be inclined to believe it as well.

Rather than trusting her instincts and the fact that a storm has now made leaving impossible for several days, Julie decides to try and enjoy what remains of her vacation with Karla, Tyrell, and Ben. And with the bar flowing with alcohol from Nancy (Jennifer Esposito) I don’t blame them for wanting to ignore the as-of-yet unknown killer and enjoy themselves for once.

Around the same time (mostly before) Ray is thinking of proposing to Julie and at the last minute decides to fly out and join her and the others in Jamaica. Unfortunately as his friend Dave (John Hawkes) finds out, the killer is still out there and is looking for some intense revenge. 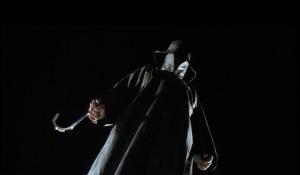 Featuring a star studded cast across both films who actually give their all for their roles, this duology is an integral piece of the horror film’s slasher genre. Take a moment to look back on them and enjoy the creepiness that a quality, well-executed slasher film can deliver.

2 thoughts on “I Know What You Did Last Summer”